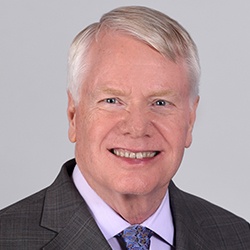 Dr. David Maxwell earned degrees from the University of Illinois in piano performance and in organ performance, studying piano with Malcolm Bilson and Dean Sanders, organ with Jerald Hamilton, and composition with Ben Johnston and Edwin London. He was elected to membership in Pi Kappa Lambda, the national music honor society. His first university teaching position was at Western Illinois University, and he was later appointed to the music faculty of the University of Southern Maine. In Portland, Maine, he has served as Minister of Music at State Street Church UCC since 1980.

As a performer, Maxwell has played numerous solo recitals as well as having performed as a member of several chamber music ensembles including The Ineluctable Modality, Musica Tricinia, and the St. George Chamber Players. He also has played with the St. Louis Symphony and the Portland (Maine) Symphony Orchestra.

Maxwell lives in Scarborough, Maine with his wife, Sue. They enjoy visits to and from their daughters and stepchildren who live in Florida, California, North Carolina, Colorado, and Kinshasa, the Democratic Republic of the Congo.