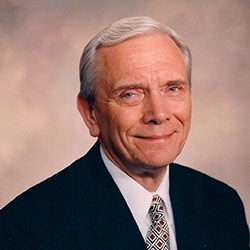 Ralph C. Schultz graduated from Concordia University, River Forest, the Cleveland Institute of Music, and Union Theological Seminary. In 1961, Schultz accepted the call to chair the music department at Concordia College, Bronxville, New York. For thirty-five years he led the Concordia Choir at Carnegie Hall, Lincoln Center and on tours through the United States and Europe. After fifteen years as chairman of the music department, Schultz became president of Concordia College, New York. Upon retirement, he was named Professor of Music Emeritus and President Emeritus.

He has published numerous organ and choral compositions and Leading the Choir, a video/book for the inexperienced choir director. With his wife Dorothy as lyricist, the hymn Love in Christ, included in Lutheran Service Book, was first written as a choral piece for the wedding of daughter Deborah to Kevin Cook. Now living in Slingerlands, NY. Dr. Schultz has founded the Jubilate Singers and Orchestra in the Capital Region of Albany. He continues to be involved as an author, composer, choral clinician and guest conductor.