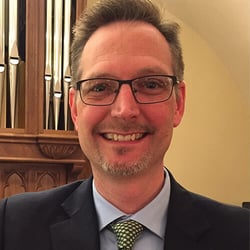 Sam earned his Bachelor of Science in Education from Concordia University—Nebraska and his Master of Church Music from Concordia University—Chicago. In 2019, he earned his Doctor of Musical Arts degree in Church Music from Baylor University in Waco, Texas, studying with Isabelle Demers and David W. Music. His scholarly interests include the formation of children through church music, 19th century Lutheran hymnals, and organ music of the German Baroque.