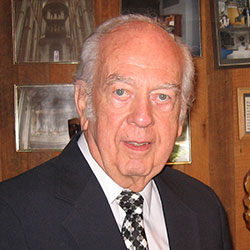 Dr. Walter L. Pelz is a longtime Bethany College music professor and renowned Lindsborg musician. Dr. Pelz was recently honored by the Association of Lutheran Church Musicians (ALCM) at its national convention in Atlanta, receiving the association’s Faithful Servant Award, an honor given to those who demonstrate a lifetime of shared faith and dedication to the expression of worship and music in the Church, and who have served with distinction in ALCM roles of leadership.

Dr. Pelz’s career at Bethany College began in 1969 when he taught theory, composition, piano, and organ, directed choirs, and was the college organist. He was named the Billue-Burnett Distinguished Professor of Music, a position he held until he took early retirement in 1989 to devote more time to composing and performing. Dr. Pelz regularly performs recitals and in festivals and appears as a clinician for organ and choral workshops throughout the United States.

Dr. Pelz has composed several hundred works and is affiliated with nine publishers. His compositions are included in recent hymnal supplements and his work was featured on a CD for the ALCM.

His many recognitions include Kansas Composer of the Year by the Kansas Federation of Music Clubs. In 2001, he was awarded an honorary Doctor of Letters degree from Concordia University River Forest for his “outstanding contribution to Christian Education through scholarly research and publications which are widely recognized and appreciated in the church and nation.” He is a charter member of the ALCM and the American Guild of Organists, where he holds the Choirmaster Certificate. In 2012, he received the Artist’s Lifetime Achievement Award from the Lindsborg Arts Council “in recognition of his outstanding work with Bethany College music students and various choirs as well as for his composing and performance skills in organ music.”

Over many summers, he was involved in numerous nationwide workshops to help introduce Lutheran Book of Worship. He has served as an organist at regional and national church conventions and has also performed in England and Germany. During his retirement, he has continued to maintain an active performance and composing schedule. He also formed the choral group Bach at Bethany Singers, which has presented yearly concerts at Bethany Lutheran Church in Lindsborg.

On June 10, 2017, he and his wife, Dolores, celebrated their sixty-seventh wedding anniversary. They have three married daughters, eleven grandchildren, and twenty-two great-grandchildren.